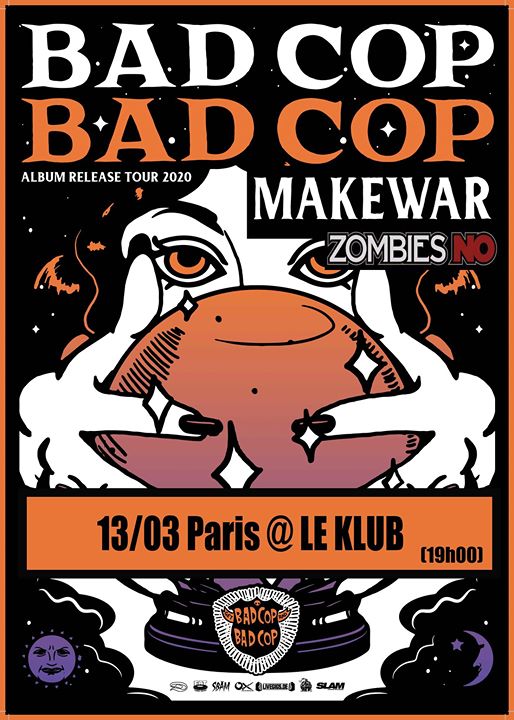 Bad Cop / Bad Cop (Fat Wreck Chords…)
Expect pop inflected punk, vocal harmonies with strength, connectedness and positivity reflecting through their music.
It’s been a hectic couple of years since Los Angeles punk quartet Bad Cop/Bad Cop dropped their debut full-length, Not Sorry and their second album, Warriors that’s out on Fat Wreck Chords. Warriors is an album that manages to be both fun and thoughtful. There’s a good reason for this. Many of the album’s most cathartic, aggressive moments come from the mind of co-vocalist Stacey Dee, who after being at rock bottom has come out stronger than ever. She was able to expand her horizons, writing songs as poignant as “Victoria” (about a friend’s child who committed suicide) and “Womanarchist”. They are among the first out of the gate in the punk rock Trump era and have set the bar incredibly high! CHEERS!
—–
MakeWar (Fat Wreck Chords…)
MakeWar is THE punk band for today’s increasingly polarized MAGA world: Furious, multicultural, packed with revolutionaries, friends to those in the cages, behind the walls and trapped in Florida, lovers and repurposers of classic art and style, from punk, to aughts-era-emo to art film to Los Fucking Crudos. When Get It Together drops on November 1st, 2019 hold onto your hats. They’ll be touring extensively with Lagwagon, face to face and NOFX. These guys may not be the ones to personally usher in the revolution, but they’re damn sure gonna be the soundtrack. MakeWar is one word. It’s a state of mind, not a statement
——
ZombiesNO
Melodic heavy skatepunk band combining early 90’s and 2000’s punk rock, with lyrics in favor of social awareness, thoughts, freedom of speech & life. Born in Venezuela, now based in Paris with a multicultural diversity. “…combine the essence of melodic punk rock & ferocity of hardcore punk attitude with such ease.” We speak a Broken English between but we’re doing fine! In the scene, Zombies No shared with prominent Latin American bands such as Dischord from our original hometown Caracas and TheZeta. Also, 69 Enfermos from Brazil, DobleD from Mexico, Play Attenchon from Ecuador. Other important bands include Lagwagon and A Wilhelm Scream, Adolescents, F.O.D,, The Creepshow… the band is currently on tour and preparing the release of ALL YOU CAN HATE Ep.