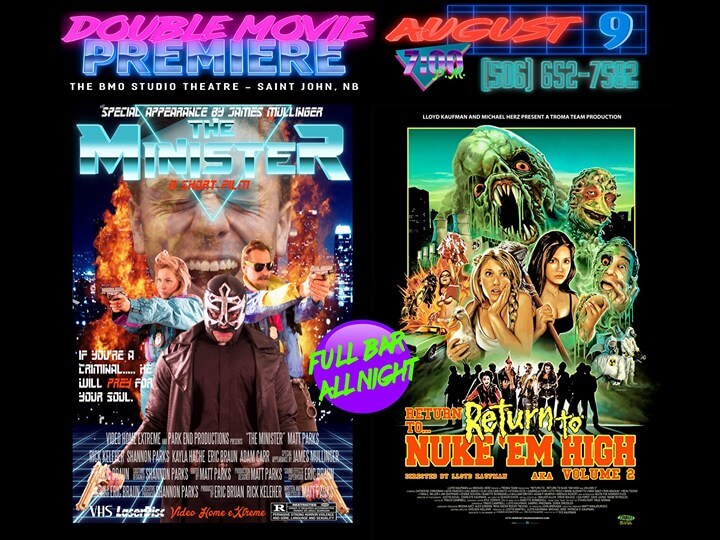 The first ever screening in Atlantic Canada of Troma’s latest classic plus movie premiere of brand new film shot and based in Saint John, New Brunswick starring James Mullinger!

Book now, this will sell out!
https://secure.ticketpro.ca/?lang=en&server=ww3&aff=sjtc#achat_SJT09HS19

This event will be a celebration of the wonders of VHS with rare and cheap VHS for sale, special surprises, additional films and trailers and cast and crew Q&A!

Description: Guest-starring comedian James Mullinger, The Minister is a low-budget, over-the-top homage to the direct-to-VHS action movies of the early 1990s. Produced to look like a fake movie trailer, it takes place in a futuristic, crime-ridden Saint John, Canada. You don’t want to miss this!

Plot Summary: A former special forces soldier lives the peaceful life of an evangelical minister and family man, until his wife and child are brutally murdered…. With the police unable to help, and with justice out of reach, The Minister is visited by an angel and given a mission from God that he couldn’t possibly refuse: to send all the criminals in the city to hell, including the ones who took his family from him, with complete absolution from sin….

Written and Directed by: Matt Parks

Plus:
Return To Nuke Em High Volume 2
Directed by Lloyd Kaufman
Following the events of the previous film, a lesbian couple are determined to eliminate the most corrupt, evil forces of Tromaville and the world.