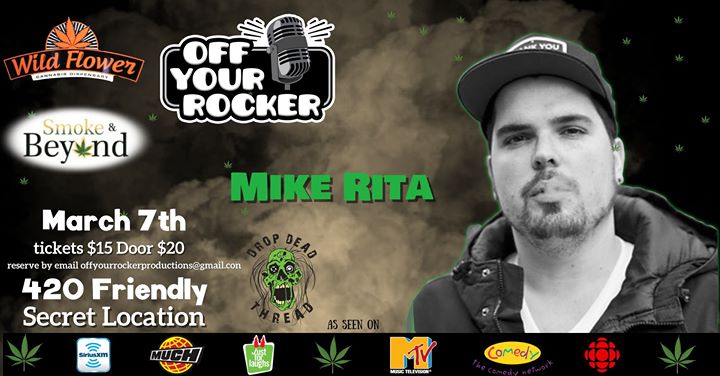 Mike Rita makes his return to Cornwall.
This time in a 420-friendly room!
Advance tickets are $15 each and can ONLY be purchased by email reservation at:
offyourrockerproductions@gmail.com.
Payments will be arranged.

Limited tickets MAY be available for $20 each on the evening of the show, but we expect to sell out quickly!

PLEASE NOTE: The location will only be announced on the day before the show. March 7th, 8:30pm.

Comedian Mike Rita is exactly what you think a comic should be; funny, smart & relatable. The son of Portuguese immigrants, he has turned his memories of growing up Portuguese in Toronto into one of the most popular comedy acts in the predominantly immigrant city and across the Portuguese diaspora.

Mike has performed at festivals and on TV/Radio across the country with appearances on MTV, Much Music, CBC Radio, SiriusXM, Just For Laughs in Montreal, and JFL42 in Toronto.

He’s also well known for his weekly show “Stoner Sundays” at the Vapour Central in Toronto which has been featured on Pot.TV.